Overview: The light at the end of this historic tunnel includes a wooded oasis, a waterside winery and a chef who walked away from five star cuisine to focus on making some of Connecticut’s best sandwiches.

The Trip: No matter how many times you visit it, the historic railroad tunnel at Steep Rock Preserve always seems to appear suddenly in the distance, a gigantic cavern from which cold air emanates and birds sometimes flutter. As I wrote for Connecticut Magazine in 2015, “I turned a corner and there it was gigantic and menacing, looming like a set piece from a Hollywood adventure flick—a circular hole in the side of a ridge surrounding a black vacuum of darkness. 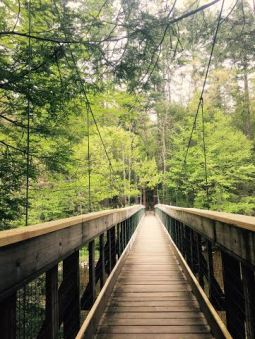 “I had driven 45 minutes, and thanks to faulty navigation, had walked more than three miles by the time we found the tunnel. It was bigger, by far, than I’d expected. Somehow overlooking the fact that trains had at one point passed through it, I’d envisioned something small and non­-cave like. I couldn’t have been more wrong. Big enough to fit several buses through its opening, it looked like the type of place King Kong would be happy to call home.”

On our most recent visit, we were able to forgo the Biblical­ style wanderings in the wilderness and found the path to the historic railroad tunnel without difficulty, or without too much difficulty. The 235­-foot tunnel cuts a curving path through Steep Rock Ridge and is one of my favorite attractions within Steep Rock Preserve and one of Connecticut’s coolest hidden gems. It was made for the Shepaug Valley Railroad, which connected Washington Depot (then known as the Hollow) with New York City. A crew of coal miners from Pennsylvania constructed it over nine months between 1871 and 1872. Mostly these coal miners worked by hand using picks, but they also employed explosives.

In 1948 the train stopped operating and the tracks were removed, leaving behind a fascinating relic of engineering for generations of hikers to enjoy. The tunnel has what cave explorers refer to as a Hollywood opening, meaning a giant cavernous entrance. Because it curves, you can’t see the light at the other end of the tunnel, this creates a surprisingly spooky effect that photos don’t come close to capturing.

But cool as it is, the train tunnel is only one of the many things that make visiting Steep
Rock preserve a perfect day-trip. The beautiful preserve, located within the idyllic Shepaug River Valley, has miles and miles of trails ranging from relatively flat riverside walks to intense near­-vertical hikes. The train tunnel is located not far from the Hauser footbridge. Another must­ see attraction, this suspension bridge shakes like a trampoline as it carries walkers across the river, and affords visitors a wonderful view from the center of the river. Those who don’t mind a steep and somewhat intense hike can trek to the Steep Rock Summit, a 776­ foot high lookout area that provides a view of remarkably undeveloped Connecticut countryside that is reminiscent of a scene from The Revenant, minus the whole wild-bison raw- liver-eating thing.

The Pine Leaf Cafe: This casual­ fare popup is almost right on the way for those coming from the Danbury area and passing through New Milford. About 20 minutes by car from Steep Rock Preserve it is the perfect pre-hike breakfast, or after hike lunch. Opened by Chef Joel Viehland in May of 2016 as a seasonal venture before his new Kent restaurant opens, it specializes in simple but addictive sandwiches, soups and salads. Before opening The Pine Leaf, Viehland was one of Connecticut’s most celebrated chefs at Community Table in Litchfield where he won acclaim far and wide for his farm-­to-­table menu. At Pine Leaf he forgoes high end dining for a relaxed order­-at­-the-counter vibe and sharing a parking lot with The Green Spot, a high-end nursery and retail space. The basic menu items are culinary home-runs and include my favorite bacon, egg and cheese on earth shattering house-made bread as well as dishes like PLC, a smoked duck breast paired with the usual BLT ingredients to create a savory sandwich indulgence. Take out or get it to stay and sit on the deck behind the space overlooking the Aspetuck River. It’s also important to note the coffee is excellent and locally sourced. 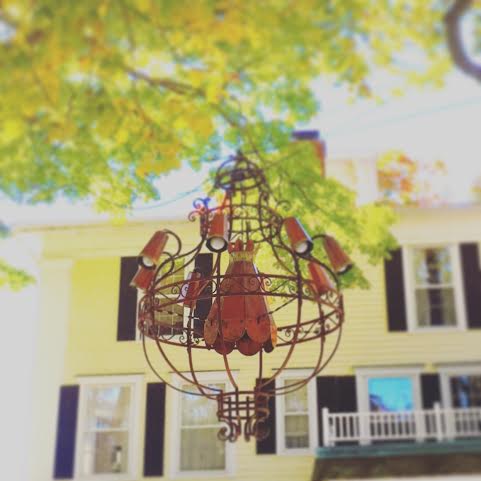 Hopkins Vineyard: About 15 minutes from Steep Rock Preserve you will find one of Connecticut’s best and most beautiful vineyards. On the hilltop overlooking Lake Waramaug this winery offers great views, especially in foliage season. For $8.50 guests can sample a variety of wines and keep the glass. My favorite vintages included the apple cider wine and the vineyard reserve. You can buy a bottle of wine and enjoy a picnic lunch on the vineyard grounds. For something more formal head across the street to the Hopkins Inn restaurant for dinner.

If You Go: Steep Rock’s main parking lot is easiest found by entering the address of 2 Tunnel Road into a GPS. Parking here affords you instant access to beautiful riverside trails; however, getting to the railroad tunnel, the Hauser footbridge and Steep Rock Summit make for an epic trek that requires a large time commitment. To cut down on time and still see the highlights, on return visits we’ve driven through the main parking lot and along a riverside dirt road (it’s open to cars, but the speed limit is 15 mph and pedestrians have the right of way). This road lets you park near the Hauser footbridge, you’ll see it on your right after about a mile and half if you look carefully through the trees. Here you’re close to the railroad tunnel: look for the blue trail and then follow the flattened railroad path to the tunnel. To get to Steep Rock Summit cross the river on the bridge and follow the yellow trail making sure to keep left when the yellow trail splits.

It is a moderate, but fairly steep hike. You’ll definitely work up a sweat but it’s worth the effort. We know from experience that it’s easy to make wrong turns at Steep Rock, so try and bring a copy of the map or download the pdf to your phone (cell reception is spotty, so Googling it once you’re lost may not work). Also wear hiking shoes and bring water. If you’re going to either The Pine Leaf Cafe or Hopkins Vineyard make sure to map your route accordingly. Though both are close to Steep Rock, neither is right next door.